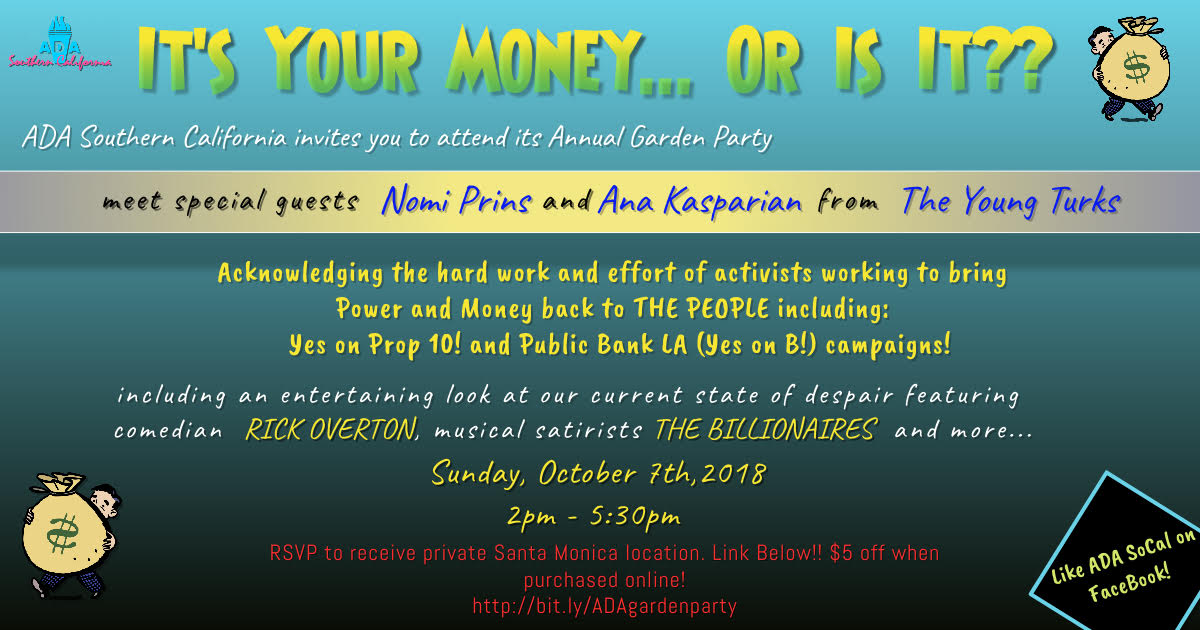 NOMI PRINS - Author and former member of Bernie Sanders’ panel of top economic advisors. Nomi will discuss the current financial scene as well as her latest book, Collu$ion: How Central Bankers Rigged the World. Some of Nomi’s previous books are:  All the President’s Bankers, Other People’s Money, It Takes a Pillage, and Black Tuesday. Ms. Prins will be the recipient of ADASoCal’s Eleanor Roosevelt Award.

ANA KASPARIAN of The Young Turks, the most successful political network on the Internet, will lead the discussion with Nomi on how central bankers control global markets and dictate economic policy, and what we need to be mindful of in the upcoming elections.

Jan Goodman, longtime board member of ADASoCal, says, “The Garden Party, occurring just before the November elections, aims to focus on some of the most vital issues on the ballot:  The bold plan to create a public bank as an alternative to Wells Fargo and other banking predators that crashed our economy (Measure B--City of L.A.), and the struggle to protect Californians from skyrocketing rents and make housing affordable again (Prop 10). These issues have been percolating for a long time, tended by long laboring hands. However, Bernie Sanders planted many progressive seeds and younger activists from his movement have become some of the key people working on some of the hottest issues on the ballot. The warriors in these battles are diverse, inter-generational, highly motivated, and worthy of recognition.”

Doors open at 2pm and program will start at 3pm sharp. Private Santa Monica, California residence - address will be forwarded to those who RSVP.

Donations will support the year round work of ADASoCal, an early endorser of Bernie Sanders.  Thousands of voters depend upon the rankings and endorsements of ADA in Southern California and around the country.  ADASoCal is a multi-issue progressive organization, fighting for peace, social justice, environmental, racial and economic equality.  Americans for Democratic Action, is not affiliated with the Democratic Party.  It was founded more than 70 years ago by a distinguished group of progressive visionaries, including John Kenneth Galbraith, Walter Reuther, and Eleanor Roosevelt, in the wake of the New Deal to push the Democratic Party to the Left.  ADA is at the cutting edge of every important struggle for human rights, world peace, and social and economic justice.