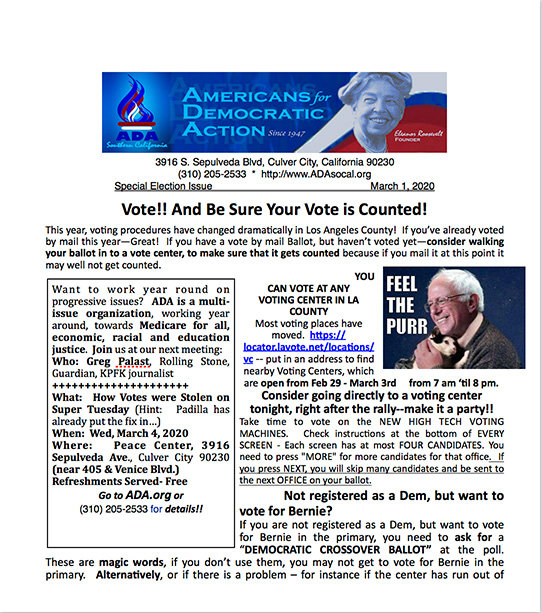 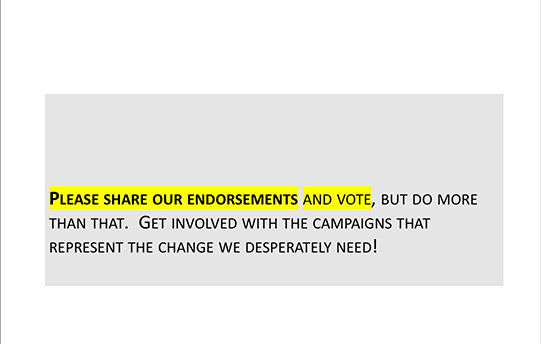 From February 22nd - March 3,  2020, California will be holding it's Democratic Primary election. Voters who are  "non-affiliated" to any party will have to either re-register Democratic Party or ask for a "CROSSOVER BALLOT" otherwise your vote will not be counted.  We no longer vote at precincts.  We vote a "VOTING CENTERS".  There will be other "down ballot" elections of City Council members, State Senators and judges, measures and propositions included with this election. To find out more about the new voting system I urge you to go to this link. LA COUNTY REGISTRARS . 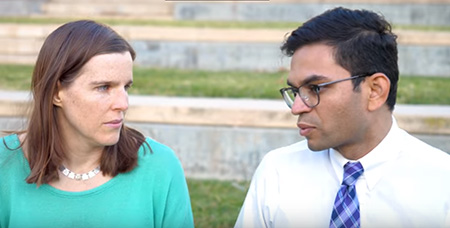 The presidential election cycle soaks up our collective attention while special elections for State Assembly, seats on City Councils, and School Boards are regularly won with less than 20% of voters casting a ballot.

We are slowly changing the culture and tradition of political insiders backed by big-money winning low-turnout elections. Here, in Los Angeles City Council District 12, we have a chance to hasten the pace of that change. Local political machines are buzzing with 15 candidates competing in the special election to fill the seat after the incumbent resigned to take a private sector job.

I am a strong supporter of Dr. Loraine Lundquist because she represents what government could be. I got to know Loraine during our campaign for Assembly in 2018; she was an Assembly District Delegate who asked a series of thoughtful questions and then decided to support our issues based candidacy.

At first, I knew Loraine’s background as an astrophysicist, sustainable solutions faculty associate at CSUN, and neighborhood activist made her a great person to have helping on the campaign. She brought experience and perspective. She listened, learned, and made valuable input at all stages of the campaign. She managed her time and family commitments as well as anyone and was able to help with everything from endorsement questionnaires to phonebanking. Dr. Lundquist is smart, committed, and hard-working.

As I got to know her better, I knew Loraine Lundquist should… and would run for office in her own right. But it wasn’t her evidence based scientific approach that made me realize she would be a great elected representative, it was her personality and character. I got to see her with her kids, her husband, her students, and I trust her. She is honest, humble, and authentic. Dr. Loraine Lundquist is thoughtful and balanced. As a mother, she is caring and empathetic. She is the kind of person I want representing me on the Los Angeles City Council.

Loraine Lundquist is the right person, at the right time, for this important position. Her election to the Los Angeles City Council would be a big deal. It is past time that scientists and women had a more prominent role in the future of government. From the conservative Northwest San Fernando Valley, she is a bridge builder who will address the looming challenges of climate change by creating clean energy jobs and a implementing a comprehensive plan towards a more sustainable way of living. Through compassion and a sense of responsibility, she will lead us in addressing our housing crisis and helping our unhoused neighbors. She will, with her character, depth and honesty transform our politics into something we can be proud of.

SATURDAY MAY 4 AT 6:00 PM WE INVITE YOU TO COME TO A MADCAP COMEDY EVENT FUNDRAISER FOR THE ADA

IF YOU BUY TICKETS IN ADVANCE ONLINE YOU GET A DISCOUNT.  PURCHASE TICKETS HERE 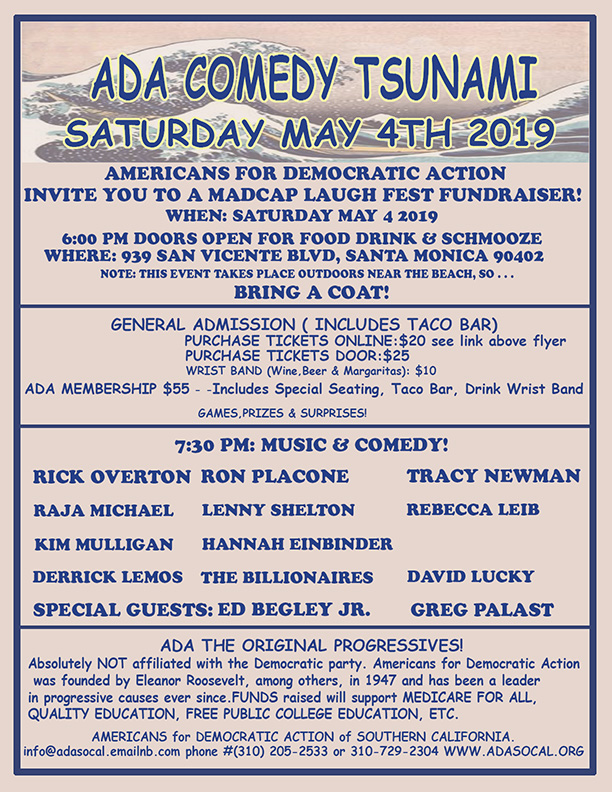 The brunch had a really nice spread with bagels, Lox , cream cheese and onions.  Salads and other goodies were available on the menu along with lemonade and coffee. After a few hours had passed, on that beautiful sunny day, it was time to hear Jackie Goldberg talk about what the issues were and the solutions she was offering.  She filled Jan and Jerry's living room with many concerned people regarding Charter Schools and the effects on the Public school system and the solutions to them. 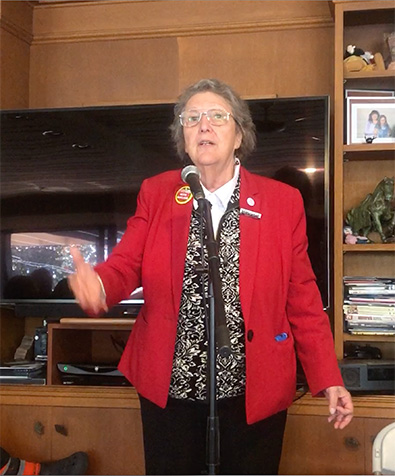 As we watch Donald Trump and the Republicans dismantle democratic institutions, destroy the idea of a progressive income tax, demonize women, Gays, people of color and Muslims and despoil our fragile planet, we have to determine what kind of Democratic Party is equipped to take them on and reclaim our society and our nation. For 26 years, the Democratic Party has made a devils bargain with the same corporations that their Republican colleagues have gotten into be with. We at ADA do not believe that an elected official that takes money from the fossil fuel companies can solve our Climate Crisis, nor one that takes money from Insurance and Pharmaceutical companies can help to usher in Medicare For All. We want to see a Democratic Party that is unapologetically Progressive and Populist and not reliant on corporate cash.

Every 2 years, 7 women and 7 men from each Assembly District are elected to be delegates to the California Democratic Convention. For over 10 years, there have been Progressive slates of delegates running and winning in Southern California. These delegates work to pass resolutions and approve legislation and endorse candidates that represent the People of California and not the corporations. And by and large, progressive slates have won most of the districts that they run in. But this year, the Corporate Centrists in the Party have decided to assemble their own slates so they can wrest control of the Party from the Progressives. They even brand themselves with progressive titles like “The Grassroots Slate.”

But we’re not falling for it. ADA SoCal has endorsed Progressive Slates in a number of districts and we are counting on our members to come out and vote for each of these slates at the scheduled Assembly District Election Meeting (ADEM). Most of these slates have ADA board members and members running on them. Some feature activists we’ve worked with on issues like Medicare For All. It’s important that you vote for everyone on the slate - so we can guarantee that our bold progressive activists get to represent you in the California Democratic Party!

If you don’t know what your assembly district is, please go to this site: http://findyourrep.legislature.ca.gov

And if it’s one we’ve endorsed, just click on your district below. You can see who’s on the slate as well as the date and time of the ADEM. And if it’s not, please check progressiveslates.org and see if your district is listed there.
Some more excellent slates are listed at: adems.vote

Any registered Democrat living in the district is eligible to vote. On-site voter registration is available for those not registered as Democrats.

Please RSVP to JansOrders@gmail.com to assure that there is adequate seating. 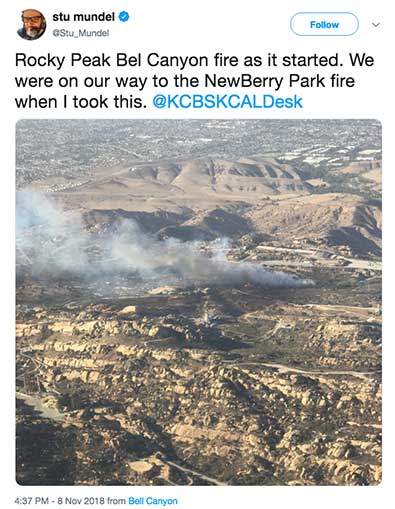 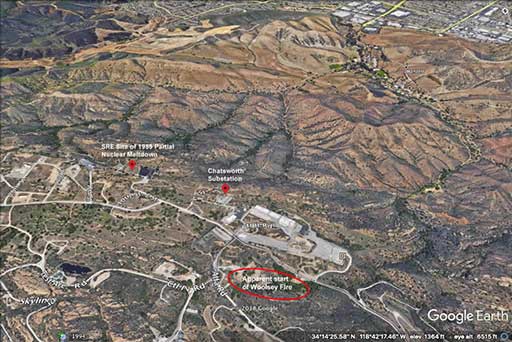 ADA SoCal has not endorsed in every single race.  But we would contend that in any race this year that has a Democrat running against a Republican, it would behoove us to vote for the Democrat on November 6th! 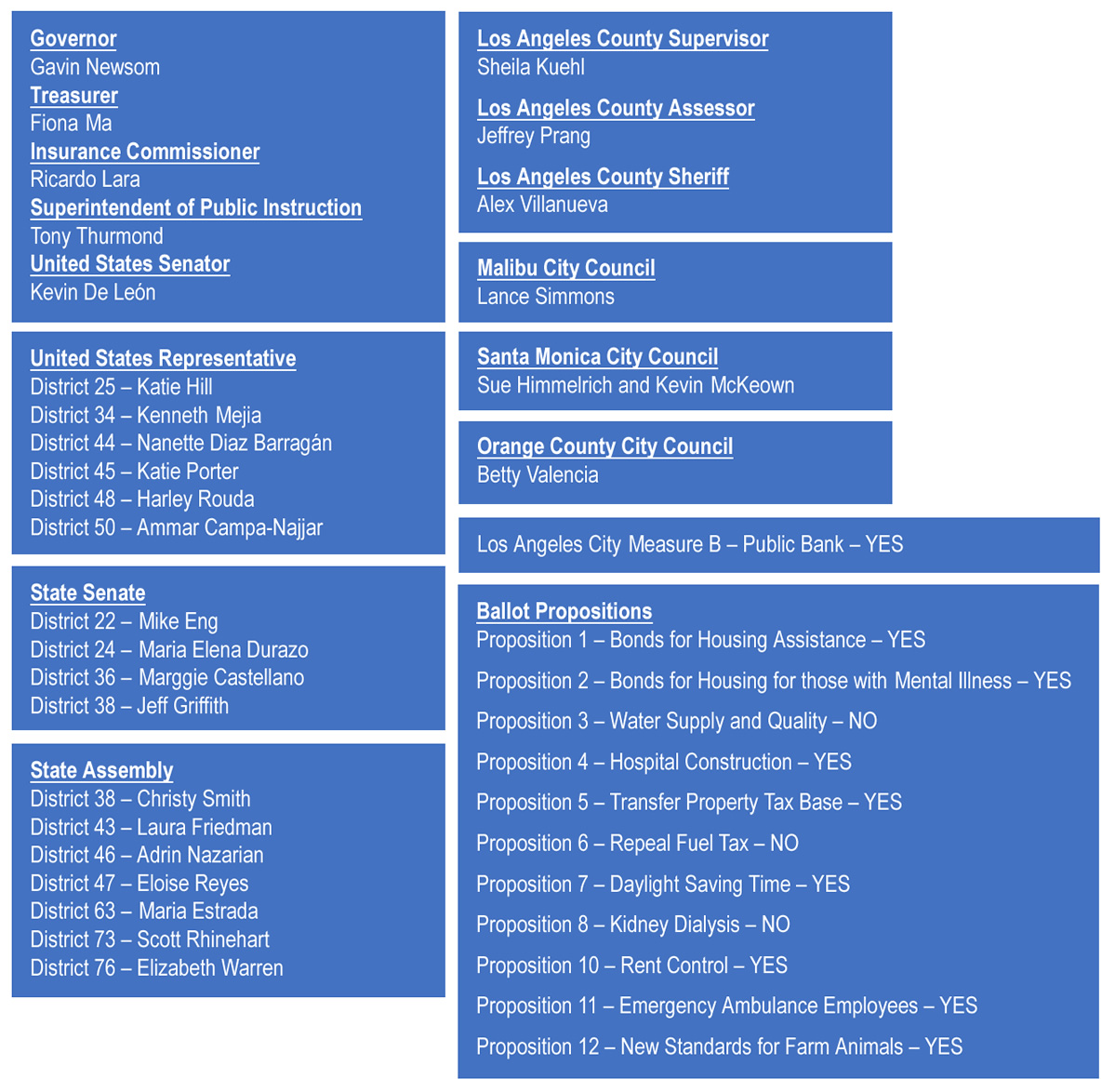